We have a love-hate relationship with our floors. There is so much character in them. Character is a major reason why we love old homes and their old parts. Character can be attractive, romantic, and nostalgic. Character can also mean that things are inconvenient, inefficient, or downright gross. Our floors have a multitude of those positive and negative qualities.

This house has had a lot of work over the years, so not everything is uniform – floors included. The main living spaces of our unit have hardwood floors typical for a turn of the century Chicago apartment (this place was built in 1890). We’re not sure if they’re original to the spaces or not, but we lean towards yes due to them being common in other similar buildings in Chicago. The boards are on the thinner side with a lighter finish. The wood is probably maple. Despite years of dents and life lived on them, they seem to have plenty of life left.

The bedrooms and closets are a a different story. They were covered in carpet when we bought the place. 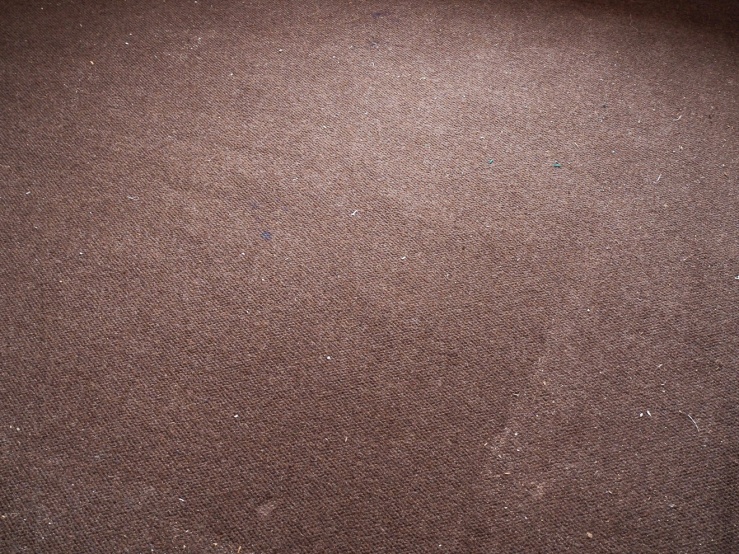 We really didn’t have any idea what was underneath them until we ripped up a corner of the carpet in the office. 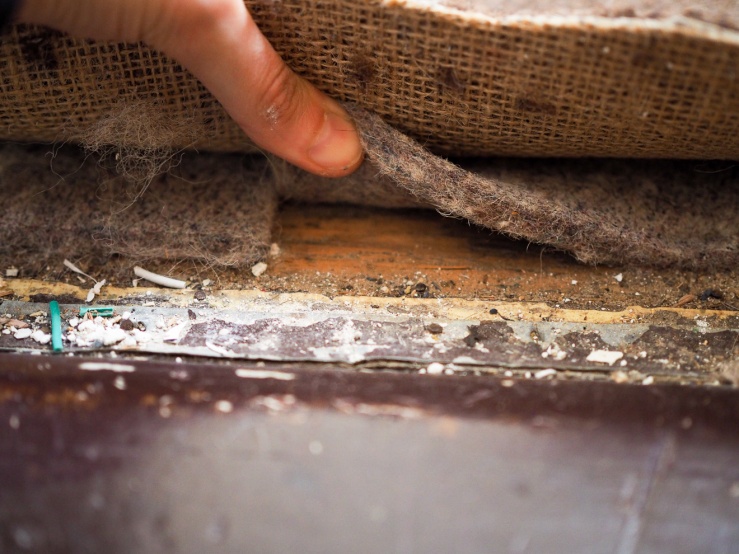 What we found was not what we expected. It wasn’t exactly subfloor, but it certainly wasn’t the smooth, pretty maple from the other rooms. It was hard to tell what its potential was (if any), but we hated the carpet so much we figured it couldn’t get much worse. So we cleared out the room and started ripping out the carpet.

Ripping out carpet is pretty easy: just start yanking on it.

It’s normally tacked down around the edges. You can pry out the tack strips with a pry bar or a hammer after you remove the carpet and padding. 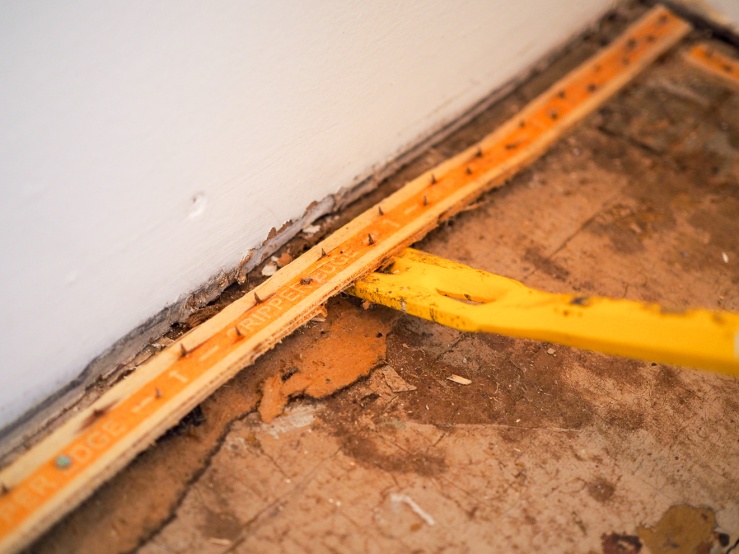 Once we had gotten all of the old material out of the room, we could see what we were working with. There was wood, but it had been painted over many times. Everything in this house has been painted over a million times!!!

The planks are wider than the maple in the main living areas and quite a bit more rustic looking. They wouldn’t feel out of place in a farmhouse.

There are a lot more gaps than the other floor. After doing a bit of research (video), we found out these planks were likely soft pine. Soft pine isn’t as good for refinishing as some other woods that might be able to be refinished several times before getting splintery. 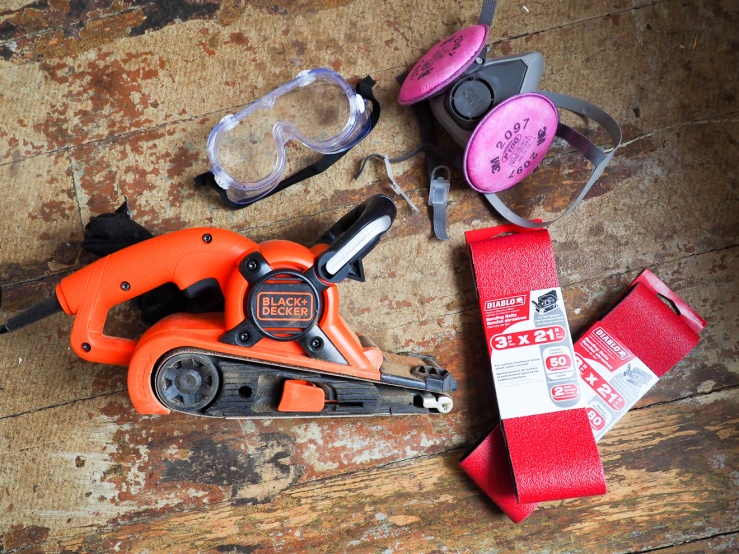 We started with a more abrasive, 50 grit sandpaper  to remove some of the old paint, then moved to a higher grit, finer sandpaper (80 grit worked well) to smooth things up. This process creates A LOT of dust, so be sure to wear a mask and goggles. Even if you have a belt sander with a dust collector, you’ll still need to run a shop vac on a regular basis to keep from looking like a saw mill. Once done, we then filled in any major imperfections with a bit of woodfiller and let it dry over night. 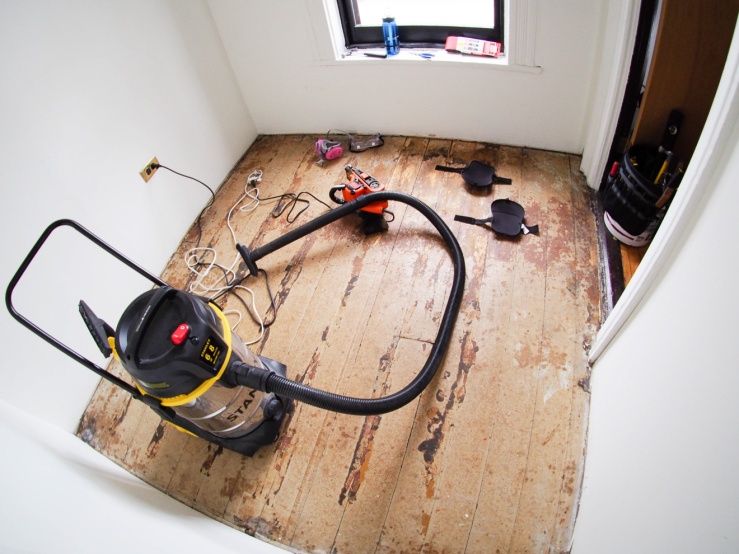 Then we went out and bought floor paint from Benjamin Moore. They have a specific type of paint that is designed for flooring that you have to purchase at Benjamin Moore retailers – we got ours at Gillman Ace Hardware. We were debating between white and black, but ultimately decided on white. While we felt a little bad about painting the floor, we came to terms with it because the floor was never going to look great in a typical wood finish due to its years of being painted over and over again, as well as soft pine’s difficulty in holding a nice refinish. In addition, it was quite popular to paint wood floors in the 18th and 19th centuries, so it isn’t even out of place. Painting the floor is pretty easy. No major tips here, other than work your way out of the room as you’re painting. Don’t literally paint yourself into a corner. We put down a couple of coats.

It was pretty amazing how much it brightened things up. And while we are still missing a baseboard in this room (we’re hunting salvage stores for something period appropriate), on the whole it gave the space a lot more character and felt more in line with the original design of the home. The end result still has plenty of imperfections, but those imperfections are more charming than commercial-grade carpet! 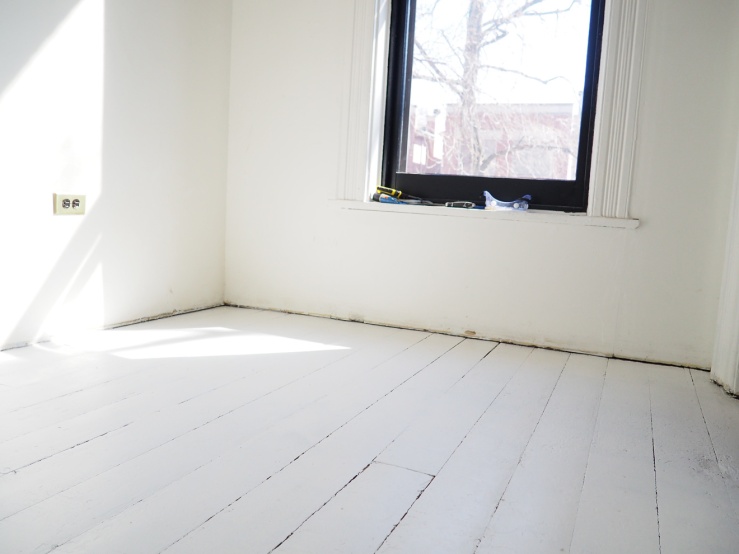 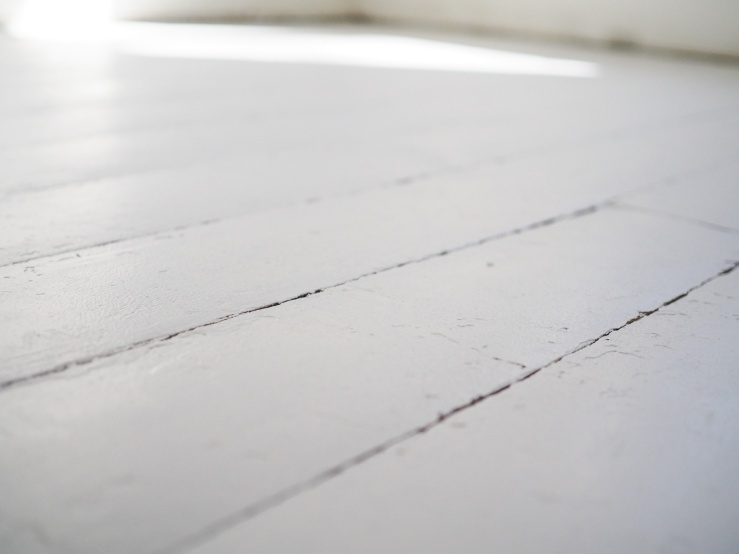 just a couple renovating and decorating our first home in chicago's bucktown neighborhood. View all posts by bucktownrevival